To celebrate my last month in Spain, I, like many before me will be cooking my way through a pig. I need not repeat the wise words of Mr. Henderson and co in stressing the importance of knowing where our food comes from. That the plastic-wrapped cuts of meat so easily placed in our shopping baskets do actually come from a living, breathing animal. So what better place to start this journey than in the land where a cured hind leg can fetch €1000; where care is taken over a well-fed animal; a simply prepared cut is juicy and flavoursome; and each body part is displayed proudly at every butcher. 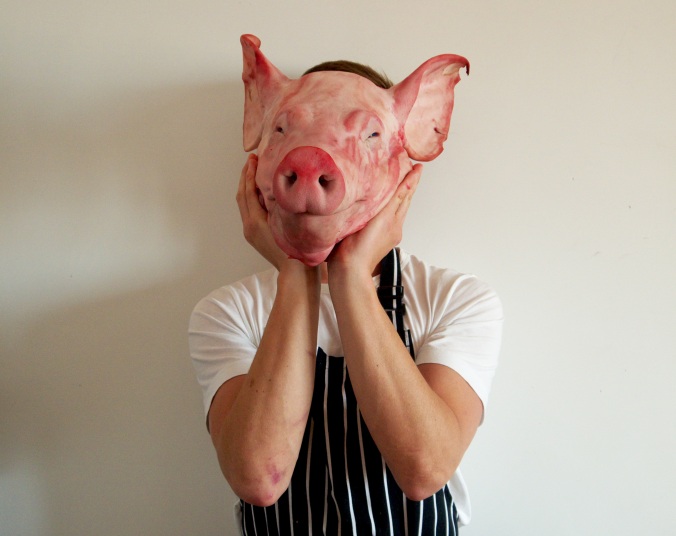 Of course, I will aim for a Spanish preparation of each meal and I will score each dish on my personal P.I.G scale: 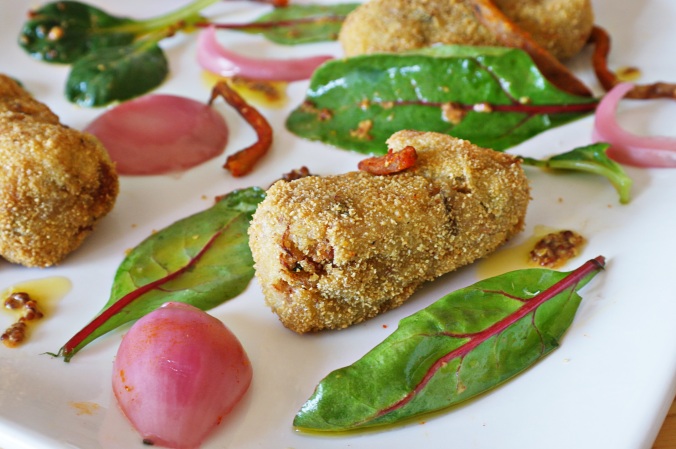 Credit where credit is due for this recipe is taken and only slightly adapted from a truly inspiring source. The British Larder consistently produces some of the most original dishes I see and share it over the web. Not only are they generous but a quick read of their ethos is insightful and heartfelt. I endeavour to eat at the restaurant on my return.

Croquetas are a sublime creation and a staple tapas throughout Spain, and almost every country seems to have their own versions. It was my first attempt and I was delighted to be able to incorporate them into this month. I could have served them on their own but I wanted  some freshness and acidity to cut through their richness so I served it with baby Red Chard and crispy Tatsoi leaves with a mustard vinaigrette and some pickled red onions which lent their own tartness and a beautiful colour to the dish. I also used the ears to make crispy ‘scratchings’ which I dusted with sweet paprika to add another element to the dish.

So before the recipe the all important PIG scores:

Porkiness: The tough gelatinous meat in the head needs a long cook , so after 4 hours cooking in stock melt-in-the-mouth meat was falling off the bone upon touch. I found the flavour lovely and subtle, but the texture is the real winner here. 10/10

Inconvenience: Unless your butcher delivers you will  be lugging at least 6 kilos of head home. It’s big. I didn’t have a pot big enough for all the snout to fit (how ironic my first dish misses the nose), and then you have to try and lift this slippery, flaky mass out of a pot filled with stock. But it took no more than 15 minutes to prep for cooking then to remove the meat (unless you live with a medic who wants to give a lesson in anatomy). However, much more inconvenience was found by my two vegetarian flatmates. fairly inconvenient 7/10

Gratification: The realisation of what I was dealing with only dawned when shaving off any remaining hairs then the head adopted a more human aspect. The pores in the soft, subtle skin; the beard-like growth; and a mouth and eyes which seemed to subtly smile. Cue vivid flashbacks of Animal Farm. But then at the same time I was proud to be putting this beautiful head to good use and it not being ground up into cheap sausages. Any simple prep and long cook would leave you with a wonderful meat. It’s also inexpensive, I scooped out around 800g  meat including the tongue and paid €5. It’s not something I will cook very often but I was truly satisfied with my experience and the resulting meal and am keen to try other recipes. Satisfied in more than ways than one: 9/10 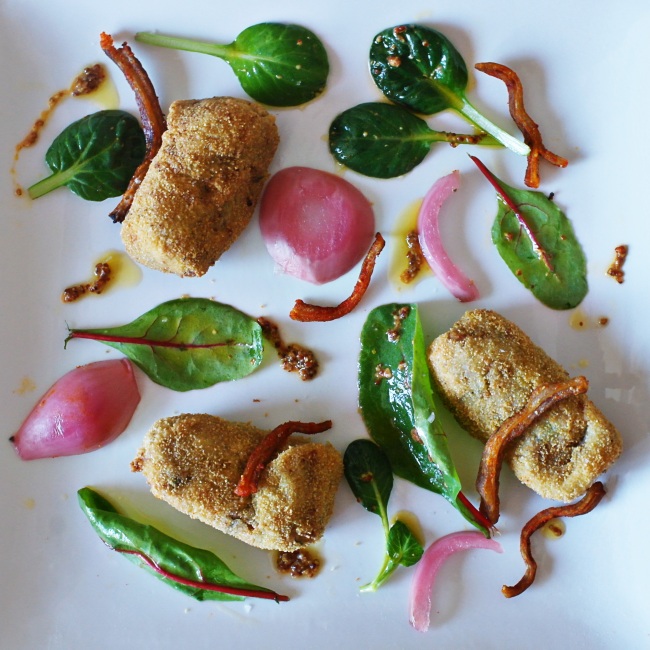 1 carrot, cut into 4 even size pieces

Once any remaining hair are removed from the pig with a razor, place it alongside the other ingredients in a large saucepan and cover with water. Bring this to the boil, removing impurities that rise to the surface. Reduce to a simmer and leave for 3 1/2 hours, topping up with water to make sure it is covered at all times. Let cool in the stock for 1 hour more and then remove from pot carefully.

Flake off the meat and set aside. I also finely chopped the tongue into this mixture, but be sure to cut the rough edged from it first and use the centre. 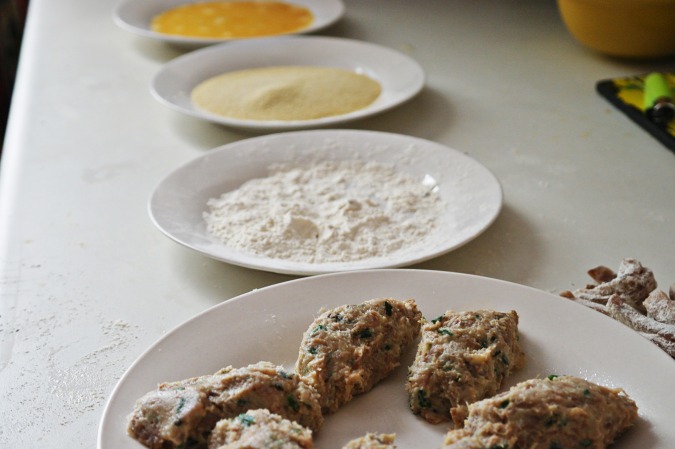 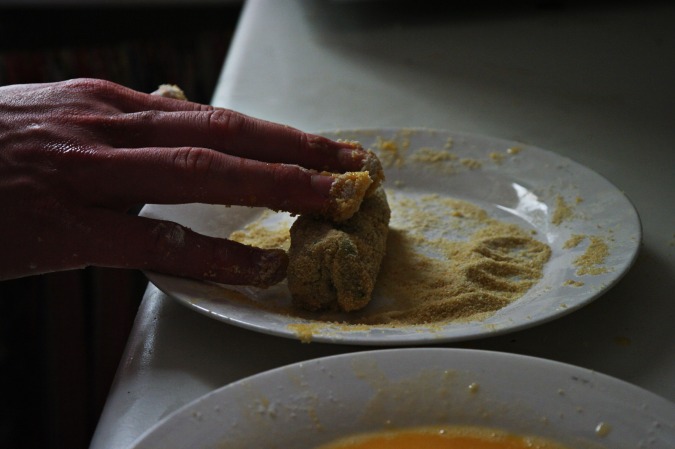 To prepare the croquetas:

Bring a saucepan of water to the boil, salt well and add potatoes, cooking until soft and falling apart. Drain and when cool enough to handle press through a ricer or sieve.

Meanwhile gently fry the onion until translucent then add the garlic, ras-el-hanout and season, cooking for a further 5 minutes. Remove from the heat, add the meat and herbs stirring until well combined.

Add the pomme puree to the mix and stir again to combine continuing whilst adding the milk and cornstarch.

You should end up with a mix that is difficult to stir, if not, add a little more cornstarch. Refrigerate this mix until cool – around 2 hours.

Roll into individual croquetas and refrigerate these again on a plate

To cook the croquetas:

Line up 3 plates, one with the flour, one with egg, and the other with the breadcrumbs. Panée them by rolling each one first in flour, then egg, then breadcrumbs.

Deep fry in batches until golden all over and leave to drain on kitchen towel. Meanwhile dress the salad and arrange with the onions on plates. Serve

For the crispy ears (optional):

I removed the ears after they had cooked with the head, sliced thinly and allowed to dry on paper towel an hour. Dust with flour and cook in the same oil as the croquetas for 4 minutes until crispy. Drain then season with paprika and salt. 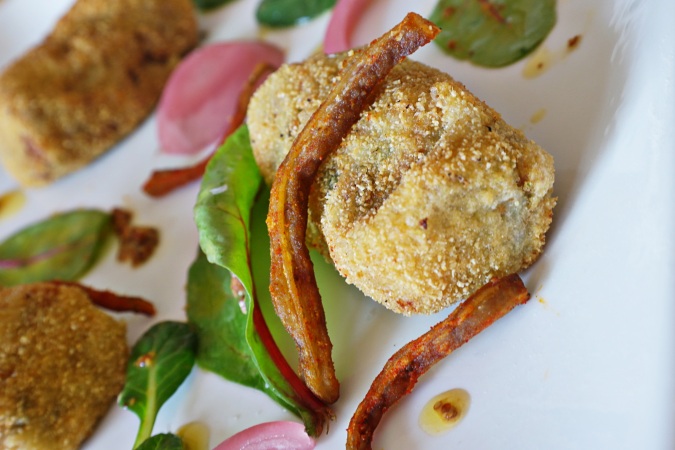 Serve this as a starter or serve more croquetas as a main meal or tapas. I did this over two days, refrigerating the flaked meat overnight before preparing the rest the next day.