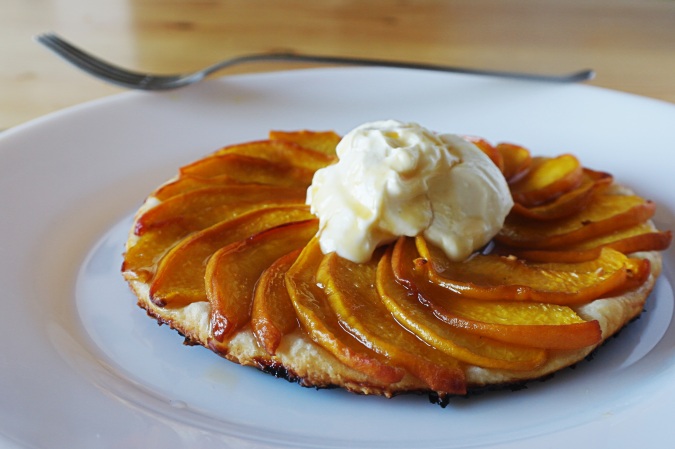 There is a memory I have of sitting on a beach somewhere in Europe, sinking my teeth into the ripest, juiciest and most flavoursome peach of my life which seemed to melt in my mouth. So vivid was this bite that I have a near sensory experience upon thinking about it now and long to eat a fruit so perfect again. 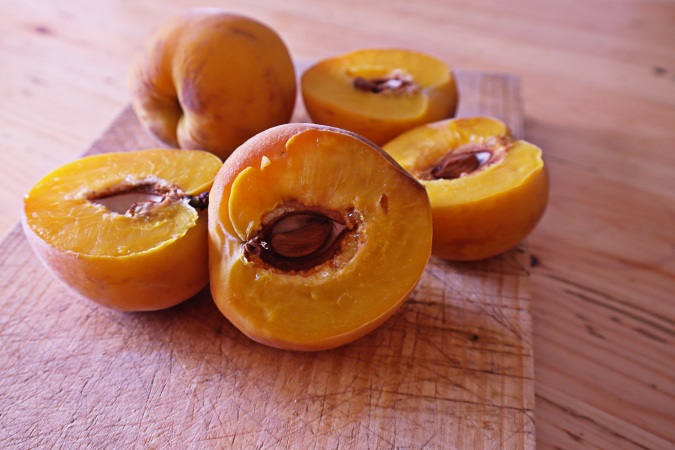 Throughout my year in Spain I have eaten my way through the very best each season offers, purchasing from one of the World’s greatest food markets with a daily turnover of the freshest produce available. From this I have learnt the importance of exhibiting the natural qualities of ingredients and not over-loading dishes with too many flavours. I had thought about how to honour the glorious peach without just simply eating it, for I know back home in England that these fruits are not what I have become used to here over the last few weeks. 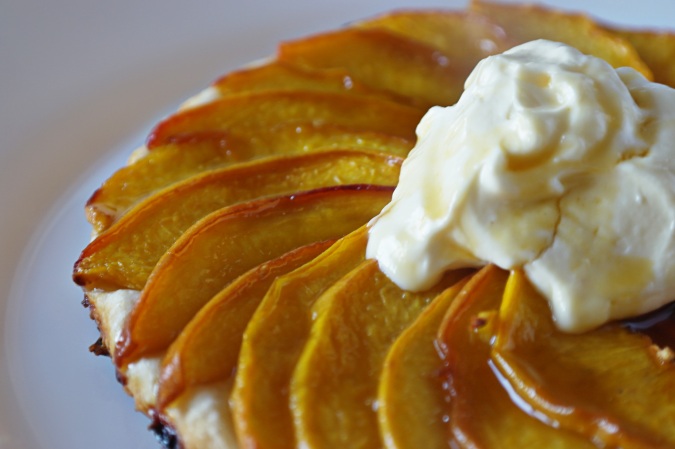 There is a distinct lack of sweet things on this site and I put that down mainly to lack of equipment here which just about stretches to an overheating hand blender. But a couple of weeks ago I met an editor who asked me to do a simple dessert for the 4th edition of her magazine ‘Revista Couche’. I was over the moon and immediately knew I wanted to do something with peaches, one of my favourite fruits, whose peak season is arriving and at least some Spanish people must be in search of new uses for the copious quantities they have.

I quickly decided on a ‘tarte fine’ as I feel its elegant simplicity wouldn’t vow for attention with the real star of the show, and to keep the recipe easy a shop-bought puff pastry can be used. I spent some time working on how to keep the peaches moist and flavoursome throughout cooking. Experimenting with poaching in syrups before baking but felt they imparted too much sugar and over-softened the already ripe peaches. However, this would work for the unripe offerings at home and allows for extra flavour to be infused if they were otherwise tasteless (star anise went particularly well). Finally, to retain their natural flavour I settled on a short maceration with brown sugar which drew out some of the juices but then allowed for a syrup to be poured over at the end of cooking, adding moisture and a rich peach flavour. 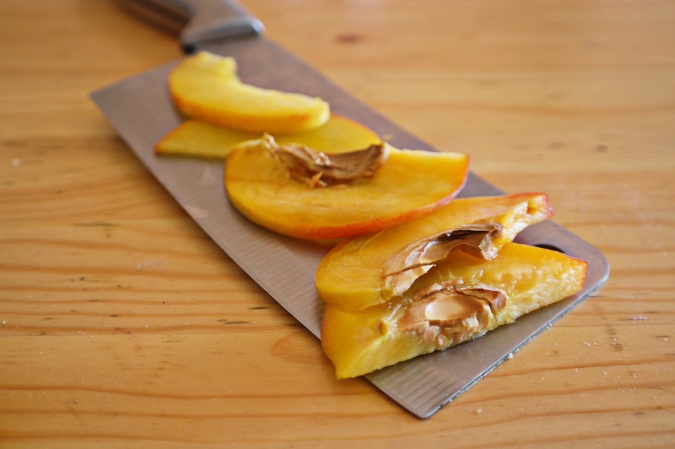 The idea for the rosemary pairing is taken from Heston Blumenthal’s peach ‘tarte tatin’ served with a rosemary and syrup cream. I instead infused mascarpone whose addictive creamy richness features more and more in my food. The aromatic peach boosted by a peach syrup sits perfectly alongside the subtle pine notes within the mascarpone upon a thin flaky pastry. 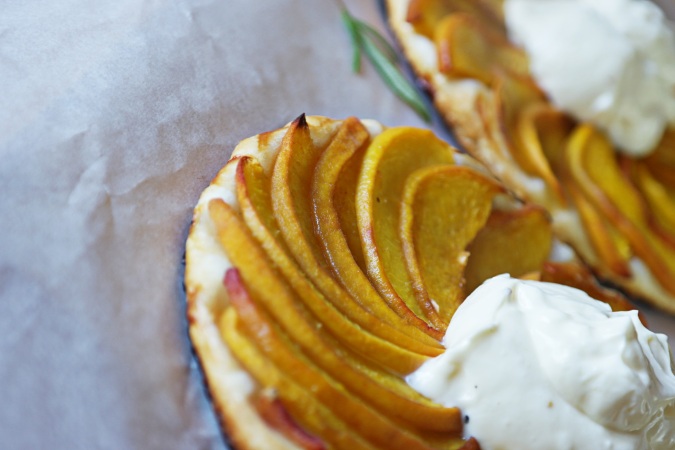 Unfortunately in a rather dramatic and rapid turn of events, the magazine has had to stop. Some powerful ans seemingly threatened competitors applied pressure upon the sellers of advertising space to cut their links and within two days the free magazine had no choice but to close. It is a shame and lost opportunity for me; but for the young, ambitious team behind it, it means losing their career and years of effort. I felt it captured the mood of the Spanish economy perfectly: the established staying put nicely at the top without many problems whilst the small man is left without any hope of joining and sharing with them. 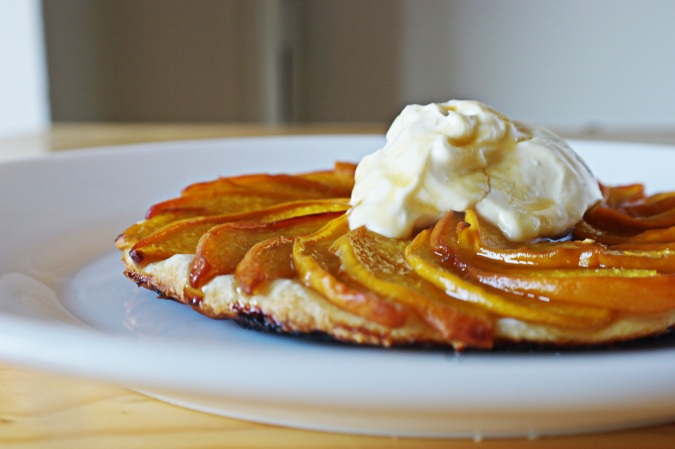 6 of the best peaches available

For the rosemary infused mascarpone:

For the peach syrup:

Place in a bowl and mix well with the sugar. Cover and leave to macerate 1 hour in the fridge. If using unripe fruit then this stage can be substituted for poaching the whole fruit in syrup or macerating for longer and/or with alcohol.

Meanwhile, roll the pastry to a 2mm thickness and cut out four individual tarts of around 5″ diameter. Place on baking parchment and use a fork to poke holes in the centre of the tart, around 5 stabs is fine.

Lay the slices onto the tart bases as desired, allowing a second for any excess moisture to drip off back into the bowl before placing. Place the tarts on a tray in the oven for 25-30minutes, checking regularly and removing when the pastry is golden.

Meanwhile, place the cream and rosemary in a small saucepan. Bring to a simmer and turn off the heat before it boils completely. Allow to infuse for 20 minutes.

Using a fine sieve strain the infused cream into a high-sided bowl or jug, discarding the rosemary. Add the other ingredients and whisk for 5-10 seconds with an electric whisk to combine well, soft peaks should also form.

With the tarts removed from the oven and allowed to cool on a rack for 5 minutes, add the syrup which is left in the macerating bowl to a small saucepan and on a high heat reduce until a syrupy consistency. Stirring constantly. Don’t allow to thicken too much as it has to cover four tarts and will continue to thicken whilst cooling.

To serve, place a spoonful of the mascarpone into the centre of each tart. Then, using a spoon, drizzle each tart with some of the syrup. Enjoy warm or cold. 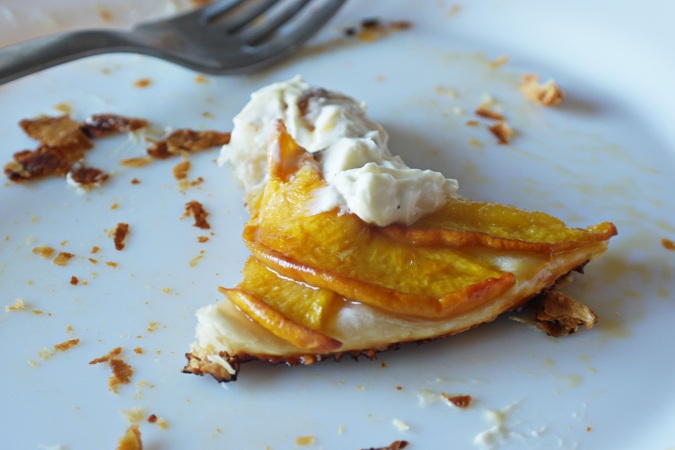