Over the past year the fig has climbed through the ranks to make itself my favourite fruit. This is no doubt down to having access to the best figs I had eaten in Spain and then during my trip to Italy, indulging in unhealthy quantities of ‘fichi caramelatti’. Their versatility as an ingredient seems endless in their fresh and dried forms, their aesthetics unsurpassed, whilst the previous fig post I made has been my most visited

Caramelisation of these sugar-heavy fruits is quick and produces some complex flavours, for me the near burnt caramel flavour really sets off the fresh sweetness that remains in the untouched seeds inside. Eaten raw or cooked, figs lend themselves to a huge range of preparations and combinations so try and buy in bulk and experiment especially with some conserves or jams. In the UK they are especially expensive but I have been fortunate enough to buy some cheap crates from the Italian baker near me who also holds a passion for figs and thus buys some serious quantities which he puts to use in some amazing cakes. We are also currently waiting for the figs on the neighbours tree which hangs conveniently over the fence to ripen. 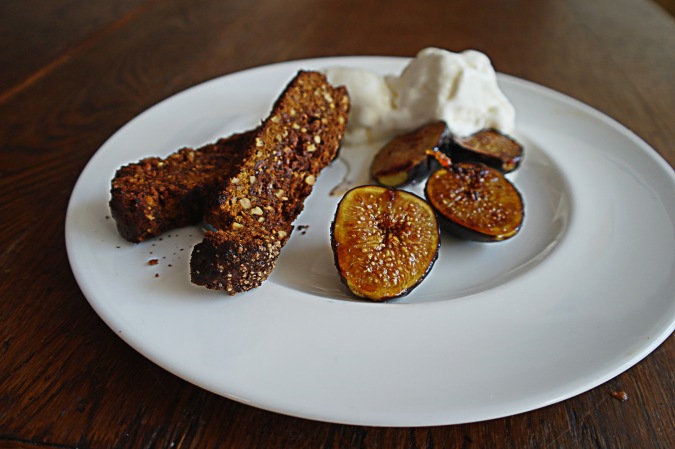 The idea for this came from a ‘gelateria’ I visited in Italy which offered a fantastic caramelized fig and ricotta flavour. I decided the texture of the figs is too good a thing to put in an ice cream so serving them separately was logical. I made this at a dinner for 16 and so decided that quantity of ice cream wasn’t feasible with the small machine at my disposable and so asked my favourite Italian shop to make a batch. It is cream based and with a little sugar, but I can’t find a recipe on the web which sounds up to scratch, it had a really creamy texture whilst internet versions seem more flaky.

The fig and walnut biscotti recipe is from the infamous Smitten Kitchen which in turn is lifted from the Batali ‘Babbo’ cookbook – they are really flavoursome and worth making just to eat on their own. I omitted the cloves and probably left them in the oven slightly too long.

To Caramelize the figs, simply halve and sprinkle with sugar. Place cut side down in a skillet over a high heat until caramelized.

This could be a lunch for one, or divided as an antipasto dish. The combination of silky prosciutto with creamy mozzarella and the sweet fig flavours is fantastic and I feel this is a lovely way to display them.

Caramelize the figs as above and get layering!